WASHINGTON, DC – Rep. John Katko (R-NY), Ranking Member of the House Committee on Homeland Security, joined T.J. Holmes on Good Morning America 3: What You Need To Know to discuss the latest on Russian aggression toward Ukraine. 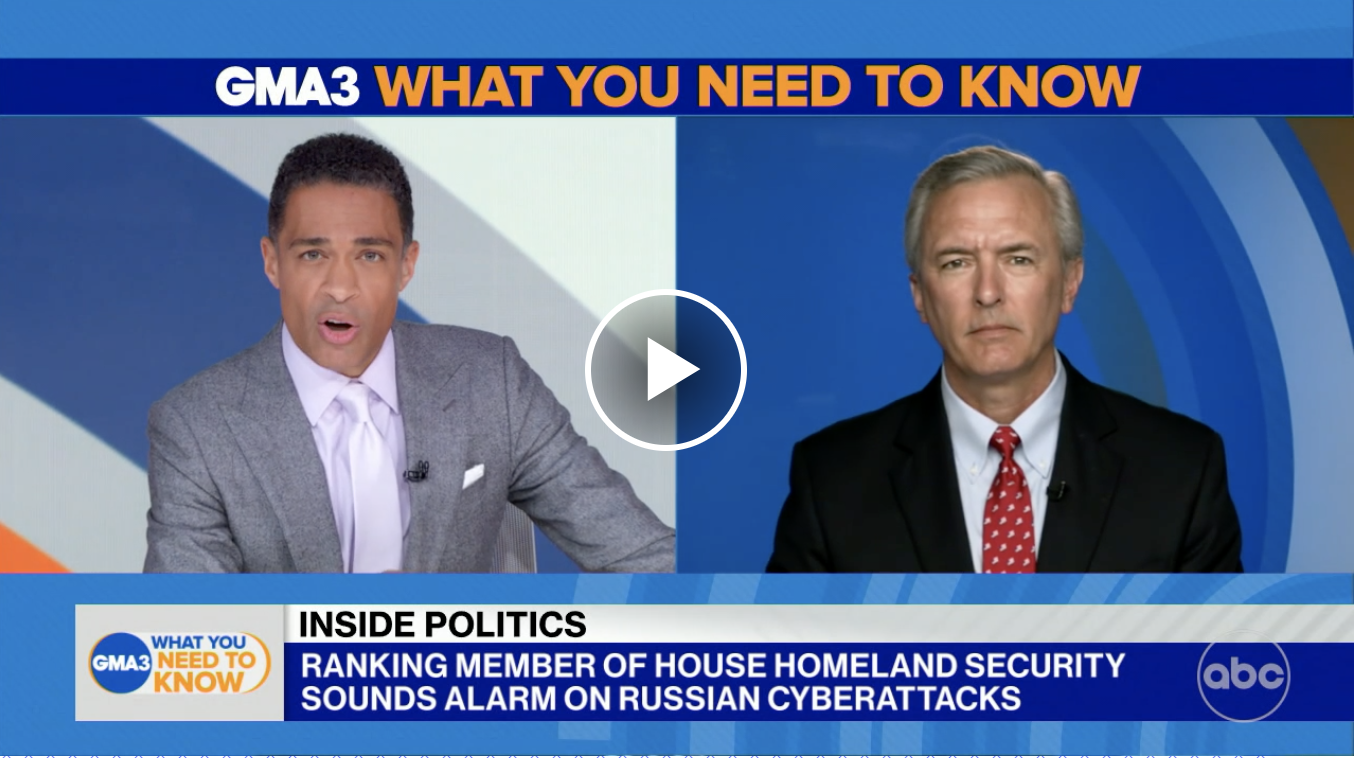 Potential for Disruptions Based on Russian Cyberattacks: “There’s no question that’s the case. It will especially be the case if Russia goes into Ukraine, and we do enact swift and severe sanctions as this Administration is saying. That’s why at the Homeland Security Committee, which I’m the Ranking Member of, we’ve pushed very hard to make sure that the cybersecurity structure within Homeland Security is working hand and glove with the private sector – encouraging them and helping them, making sure that their networks are as secure as possible because that is critically important going forward. It’s really new modern warfare, T.J.”

U.S. Banks and Corporations are not Safe from Cyberattacks Regardless of Tensions in Eastern Europe: “Over the last year or two, we’ve seen major cyberattacks that are sponsored by China and Russia, and we haven’t clapped back in the manner that would be served as a deterrent to them. There really is no deterrent, and you are right – every system really has the possibility of being attacked, and we just have to encourage businesses and individuals to be as smart as they possibly can.”

What Could Potentially Disrupt Americans’ Lives: “Everything is vulnerable, until we make sure that they’re ultimately secure. We’ve already seen the pipeline disruption with the Colonial Pipeline attack last year, and what that meant for gas supplies in the eastern seaboard. It was a huge problem, and yes, our utilities are vulnerable. Yes, our financial institutions are vulnerable.”

Indicators of Russia Ramping Up Cyberattacks: “It’s already happening in Ukraine. It’s a prelude to any invasion, and that’s like I said earlier – it’s really kind of the modern warfare model. We have a huge cyber command within our military structure now for that same reason it has both offensive and defensive capabilities. Russia has already done major cyberattacks within the Ukraine, and we could see it come to the Homeland and we’ve got to be prepared for it.”