Watch the exchange here or below. 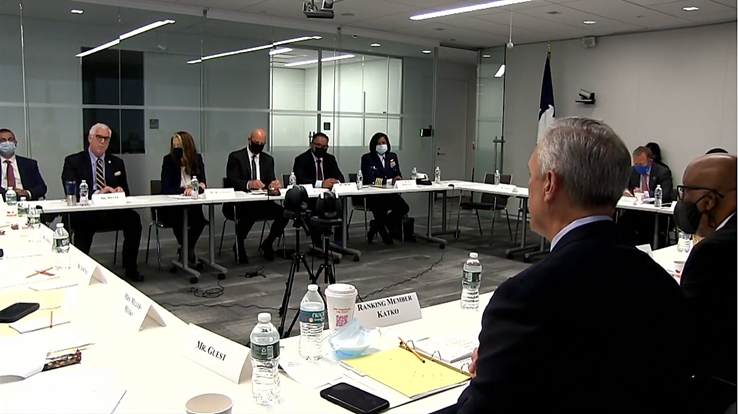 KATKO: “Looking forward what do we need to be doing with respect to the Afghan dynamic to help keep our country safe? What are some of the things we need to do in your opinion to help us keep safe, not just in New York City but all over the country?”

MILLER: “Ranking Member, that crosses a few lines from what is the diplomatic outreach to what are the intelligence platforms you can use to collect when you don’t have a solid American government footprint in countries. Afghanistan is surrounded by six other countries, none of whom we have the kind of relationship with that will allow us to reposition the assets you would need to do the kind of anti-terrorist enforcement, that’s going to be required in Afghanistan so that’s complicated.”

MILLER: “… How does the Taliban reshape itself? Do they try to become a part of the world community, or do they take a former position of rampant human rights violations and allowing terrorists sanctuary? How do we make alliances that allow us access to do that kind of enforcement in Afghanistan because I don’t think there’s anyone in this room, especially in this building sitting on this land, who has any vision that it would be okay for terrorist infrastructure, in terms of bases and organizations, to go back there.”

KATKO: “That is one of my concerns—one of their appointments to their cabinet is the founder of the Haqqani Network. He is on the terror watch list, and an FBI most-wanted. So I think that’s a bad signal. I also think it’s a bad signal that al Qaeda has been there, is going to continue to be there, and the Taliban refuses to denounce them. In fact, they are in 15 provinces so the infrastructure you referred to is a real concern now. Worst case scenario is al Qaeda does get a foothold where they can metastasize like they did before. What does that threat look like if that does happen going forward for cities like New York, but quite frankly cities all over the country?”

MILLER: “We can’t go back there. 9/11 was born out of sanctuary. From the ‘what to do about it,’ it is a national policy question, a diplomatic question, a DOD question, and an intel community question. But to drill down on my level in New York City, it comes back to the same place. And I don’t want to make it all about the money, but the UASI funding that protects large urban areas that are going to be the bullseye in terrorist attacks, needs to be maintained. Our footing needs to be maintained and enhanced. And we have learned, as so have the terrorists, one of the great lessons we learned was from ISIS which is if you mass market this kind of propaganda on social media, you don’t need to bring somebody into a terrorist training camp…”