SIERRA VISTA, AZ – Rep. John Katko (R-NY), Ranking Member of the House Committee on Homeland Security, joined Fox Business’ Mornings With Maria from the border in Arizona’s Tucson sector to discuss what he is seeing on the ground as President Biden’s border crisis continues to fuel the drug epidemic and crime crisis across the country. 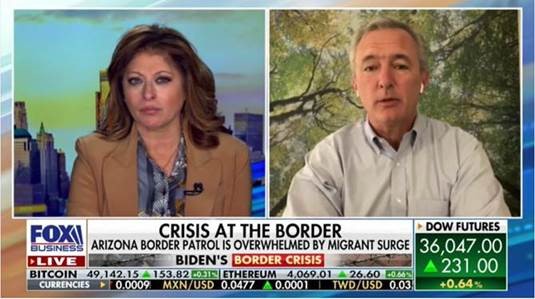 Cartel Use of Drones to Smuggle Fentanyl: “In [the Tucson] sector, fentanyl seizures are up 2,000%. The cartels are using a lot of drone technology to carry the fentanyl across the border. And at times, the fentanyl was literally bursting and being dispersed in the air. Now imagine if that goes over a populated area, what that could do. So it’s really tragic what’s going on here.”

Cartels Profiting Off Border Crisis: “The cartels are being enriched to such an extent that they’re focusing on hard drugs – heroin, methamphetamine, and fentanyl. They’re getting much more sophisticated in the production of those drugs and getting better at smuggling it across. We’re going to have a country, Mexico, that is going to be far less stable than it was even a couple of years ago. And that’s not good because we want neighbors like Canada. We don’t want neighbors like what’s going on in Mexico.”

Slow Rolling MPP Reimplementation: “Make no mistake about it. [The Biden administration] tried repeatedly to get rid of the ‘Remain in Mexico’ policy. They’re only doing it now because the courts are telling them to. I had meetings in four different places over the last two days and didn’t even hear the mention of the ‘Remain in Mexico’ policy. That is not even a factor here.”

Every State is A Border State: “So the fentanyl is pouring across this border and it’s being mixed not just with hard drugs now like heroin, it’s even being mixed with marijuana. And we’re seeing those kinds of overdose stats even in my district. We had 14 overdoses in one day in my hometown in Syracuse, New York. So every city is a border city, every county, every town. People have to understand this is going to have long-term, detrimental effects on our country.”

Standing Up to China: “We must start standing up to China and realizing the bad malign actor that they are, it is unbelievable to me. Think about this. They’re going to have the Olympics over there. And at the same time, one to 3 million Uyghurs, an ethnic group within China, are in concentration camps being killed, sterilized, and placed into forced labor.”